I love the natural world. I find it easy to say but hard to define. I moved out to the 2222 and 620 or Four Points area about 13 years ago. I’ve moved away twice but always returned and have spent about 10 years here now. I’ve watched the stretch of 2222 between 360 and 620 change over those years. The opening of Concordia University, the opening and closing of a super Walmart and the dramatic decapitation of a hill at Jester for an apartment complex. The new office complex past Jester and the even newer Indeed office building. The expansion of McNeil to include 2 apartment complexes, 2 schools and an enormous church. The 3M research facility has been the unchanged landmark of the area, thank you 3M. I lived in 3 apartments down this road, 2 of them completely new construction, 1 on 620 and in each case I wanted to have that green tree view.

Seeing the future and deciding not to act

During that time, I saw the land get cleared and the traffic increase. Each time I thought about the loss of nature but I never stopped to think any longer. That changed one Sunday morning while I walked my dog. A fence had gone up on the border of my apartment complex property and as I looked out into the trees I noticed the little bands of color around them. It slowly dawned on me that those little bands described the fate of this little forest. I listened to the birds sing, felt the warm sun and the air smelt fresh. The land which the apartment complex swore wouldn’t get developed would be leveled for something. I put it out of my mind after an emotional moment and decided I wouldn’t stay in the area too much longer. 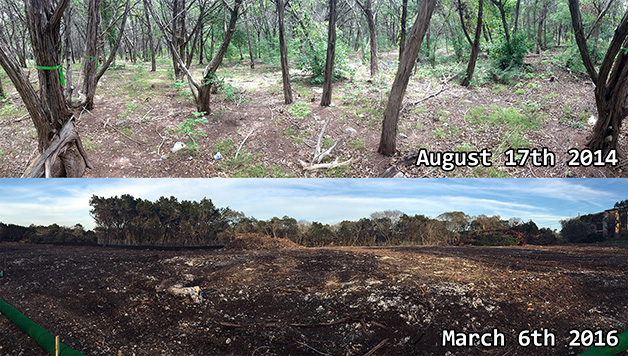 I took the first picture just because I thought it was beautiful never thinking about the second picture.

However, I found myself speechless this weekend when I saw this. I know I imagined it before but the reality was so jarring to me. Little by little the area was developed but seeing this change happen seemed to be a tipping point for me. I decided I must make time to get involved in some kind of nature volunteer work if I want to know I’ve done something. I struggled with that thought for a while though. Why did I just now want to do something about it? It was too late, the plans had been approved several years back and I obviously hadn’t bothered then or in the interim time to learn about what would happen. I decided I have to be okay with that. The idea that there is a tipping point between a thought and the will to perform the action. Armchair activist is a very accurate term, armchair anything in fact. But I decided that I wouldn’t turn away or chastise someone deciding it was time to act so I shouldn’t do it to myself. We want to place the world into buckets which are entirely separate. This bucket here agrees with me, that bucket doesn’t and there is no possibility of an overlap. I think the truth is in a Venn diagram, several in fact, overlapping countless times creating a gradient rainbow of colors.

Fear of hypocrisy, but people can change their minds

I decide to help push back on progress and save the preserves. I thought of all the animal homes that were demolished. I saw more birds than usual around the perimeter trees that day making chirps in protest, not knowing what happened or why. The residents of my apartment complex complained as well. But the damage was done. Environmentalists or nature conservationists might seem insane as they fight over every inch of land. But for every inch or acre that gets developed that natural land is lost forever. They have to fight tooth and nail because the greed of humanity has to be kept in check. If we don’t fight to conserve our natural landscape those people without this connection to the world at large will pave it down. Each concession of land brings another request to rezone some of the preserve. Each developer just needs that one acre for their project but it grows and grows. When I say developer in the context of this post I mean land developer and not the software developer kind I usually write about.

So when I hear about developers or friends of developers lobbying to remove preserve lands because of their high value I will bark about it. There is a push to change the status of the Golden-cheeked Warbler with the ultimate goal of developing these preserves. They will see big profits if they achieve those goals but won’t think of the loss, the irrevocable loss, of those endangered Texas birds like the Golden-cheeked Warbler or the Black-capped Vireo. 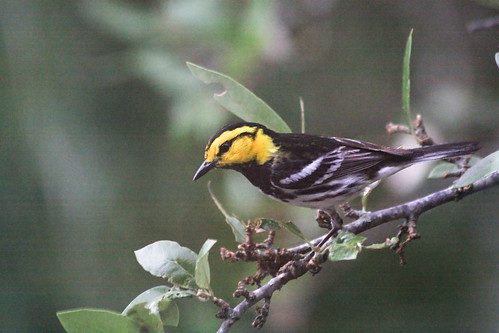 Photo of Golden-cheeked Warbler by me.

Not paving over nature but becoming part of it

At the same time, I know the land I live on was the same land that once was home to similar animals. I want to be in the middle of that nature and I’m going to live in that Venn diagram I mentioned before. I hate to see the land over developed but I want to live there. So there is a balance I believe that can be achieved. There doesn’t need to be one apartment complex built up to the property line of another. The housing developments don’t need to level the land before they build but they do it anyway because it is cheaper. They don’t need to build the houses within arms reach of each other leaving no room for trees. We have a wonderful amount of land in Texas and can afford to spread out just a bit more to leave more habitats for those who we displace to live where we do. Responsible clearing of land would ensure that the trees and animals would be respected before cutting them down. Relocating nests and families’ costs money and takes time. Don’t put our time over their lives.

Are you living around Austin, TX? You could volunteer for Wildlife Rescue in Austin for just 6 hours a week and rehabilitate animals. That is where I’ll be going to volunteer first. Maybe you’d like to try helping to take care of exhibits, cleaning or educating the public by volunteering at the Austin Nature & Science Center near Zilker Park. I’ll never forget my time there dusting, cleaning displays and helping children experience the live insect exhibit!

I am going to be birding and contributing to the Travis Audubon Society because I especially love birds. I do try to take photos of birds and get lucky from time to time you can see some of my album of select bird photos on Flickr. If you’re into birds as well you can find your local Audubon chapter and volunteer that way. There are a wide variety of volunteer opportunities with Texas Parks & Wildlife across the entire state. No matter where you live in the United States you can find something near you to volunteer your time to on https://www.volunteer.gov.

If you need more reasons or want to learn more from your home there are still things you can do. Watch the The National Parks documentary by Ken Burns. It is amazing that we have these parks today. They were almost lost several times and once lost they would never have been recovered like the flooding of Hetch Hetchy Valley. You can also watch the Sagebrush Sea by PBS which focuses on the amazing Greater Sage-Grouse whose habitat is being eroded by development. 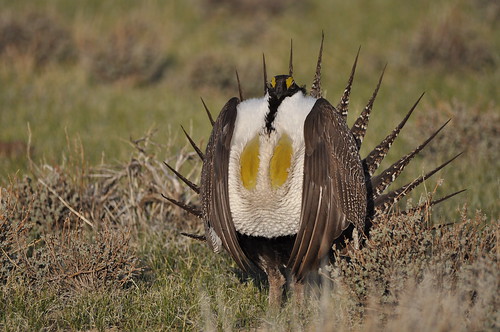 This site uses Akismet to reduce spam. Learn how your comment data is processed.

My Other Properties & Friends

Iconic One Theme | Powered by Wordpress